Endodontics is a dental specialty dealing with the diseases of the dental pulp (tooth nerve) and their complications (periodontitis, apical granuloma, radicular cyst).

The aim of the endodontics (root treatment) is the proper cleaning, treatment (including disinfection), and hermetic obturation (filling) of the root canal(s), and rehabilitation of the tooth. In order to achieve these goals, we use the most modern methods and materials – isolation of the working space through rubber dam, ultrasound tools for the opening of the orificium (root canal entrance), treatment of the root canal by NiTi tool, electrometric measuring of the working depth by an apex locator, precise obturation of root canals with an injection-molded thermoplasticized Gutta Percha instrument. For maximum precision and visual control we utilize magnified images and additional lights. Thanks to the digital x-ray equipment and the X-ray photographs taken immediately after the filling, we have the opportunity for direct control over the treatment. 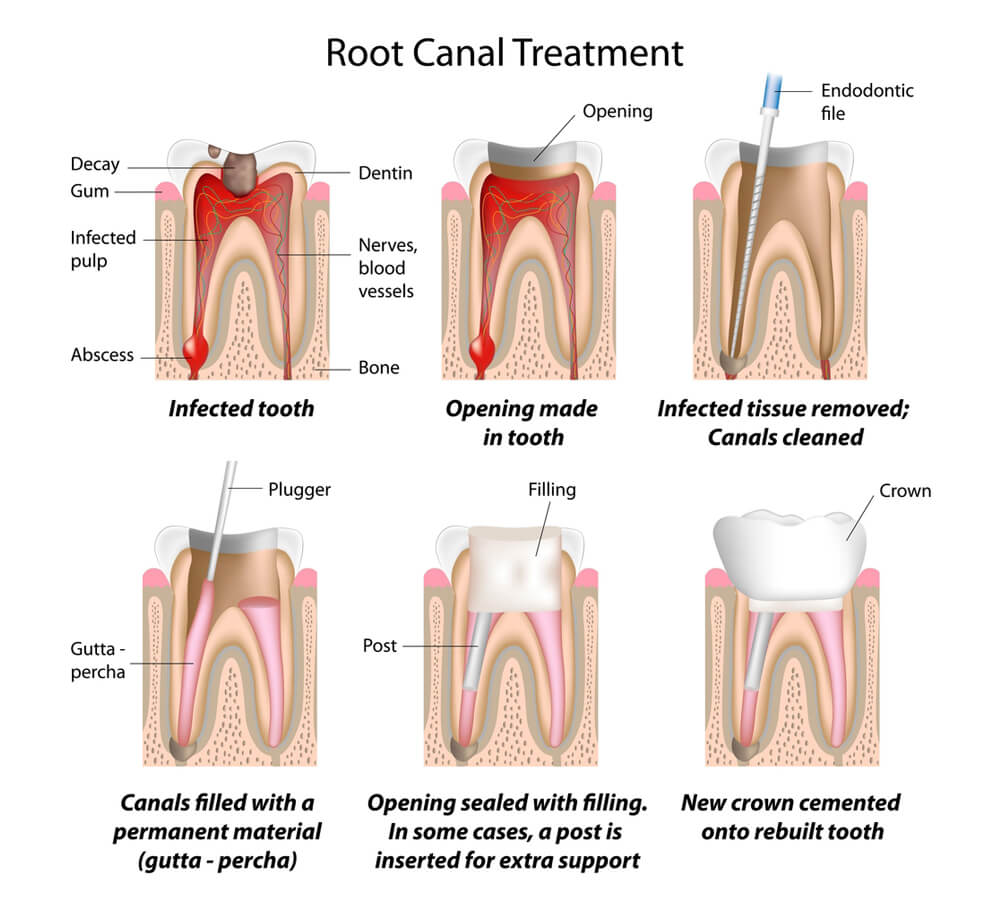 To understand better the nature of endodontic treatment, it is important for you to be familiar with tooth structure. Inside the root(s) of the tooth there is a pulp. It is a connective tissue containing blood vessels and nerves. Root treatment is necessary when the pulp is infected. This can be the result of a deep caries, crack, defective crown etc.

When endodontic treatment is carried out, the infected tooth tissue is removed, the interior of the tooth is carefully flushed and disinfected, and the tooth is treated and filled with a special material (so called Gutta Percha). After that, the tooth is completed with a filling. However, very often a crown has to be placed. You should remember that the complete course of treatment for a tooth with an endodontic problem may require several visits depending on the tooth’s condition.

Sometimes a tooth that has had endodontic treatment might cause a problem again later in life – such as pain or any discomfort. This might be the result of any of the following:

In those cases, a repeated root canal treatment should be considered. The dentist should open the tooth again and remove the old material from the canals. Sometimes several visits might be required. The tooth should be examined carefully for other canals that were not found initially.

If a granuloma is discovered on the x-ray photograph, the treatment continues longer. Teeth with granulomas usually look different in colour – they are darker and produce a muffled sound when tapped. The problem with these diseases is that they can develop almost without symptoms. If there is pain, this means the chronic infection in the bone under the tooth exacerbates, and the symptoms are becoming obvious. Dull pain appears and the mucous membrane may turn red. As a result of blood retention, a tumefaction may occur at the respective location, and if there is a fistula, pus may leak out. Sometimes when the tooth is open there is an unpleasant smell.

The treatment of a dental granuloma starts by applying medicine to the root canals, which should be replaced periodically. The healing process is checked up at every visit to the dentist. Once the infection has been healed and the regeneration process has started, the filling is applied and the tooth is completed (with a crown or only with a filling). There are cases when the granuloma is not affected by such treatment and a surgical intervention is required. The granuloma tissue and part of the apex of the tooth are removed through a micro invasive operation. This intervention is called apical osteotomy. This is a conservative surgical method which preserves the patient’s tooth.

The third, the most unfavourable method, is when the tooth has to be extracted.